I will tell you how you can make Nitro Cold Brew coffee at home step by step.

Step 1. How Can You Make Cold Brew Coffee At Home

Please don’t buy pre-ground beans, but purchase whole coffee beans and grind them at home with a burr grinder.

To make cold brew coffee, you need the following things:

Follow the instructions to make a cold brew recipe.

Step 2. How to Convert Your Cold Brew Coffee into Nitro Coffee

Now you have to package the cold brew coffee in a 3-gallon corny keg. You can use a different size of the corny keg as per your requirement. Here are some corny kegs for your choice.

Now here you need a nitrogen tank to infuse your cold brew coffee with nitrogen.

If you already have it is ok; otherwise, you can buy it locally or online. I have a choice of nitrogen tank for you below; please check it:

Now here is the step to fill the tank with pure nitrogen.

Here is one thing to say, unlike draft bears, you should need pure nitrogen N2 gas for your nitro. Because when you draft beer, you will infuse the beer with a blend of gas in a ratio of 25% co2: 75% nitrogen gas, then you would serve it. And it is going to come out fizzy with cold brew nitro coffee. So you use pure nitrogen, not a blend gas.

So the first task for you is finding a local gas dealer that sells pure Nitrogen N2 rather than a mixture of Nitrogen N2 and co2.

Now the exact challenge for you with using pure nitrogen is that it doesn’t really dissolve into a liquid very well, and you need it to do that to get that sort of foamy mouthfeel you expect from a nitro cold brew coffee. So here I have some technical solutions for you.

There are two methods for mixing nitrogen in cold brew coffee:

First of all, when pre-infusing your keg, be sure your cold brew is as cold as possible. Like other gasses, nitrogen tends to absorb better into your colder brew than room temp or warm.

It is a more affordable way of making nitro coffee. It involves pressurizing the kegs of cold brew coffee at high pressure of 35 PSI to 45 PSI for one time. Like any gas, nitrogen doesn’t dissolve into a liquid very well, and we need it to do that in different ways. First of all, when pre-infusing your keg, be sure your cold brew is as complex as possible. Like other gasses, nitrogen tends to absorb better into your colder brew than room temp or warm.

Tip: Shake the keg; it will help force more nitro into the keg and infusing it faster with cold brew coffee.

It is better for you to use a Quick Cascade Keg Lid. It will allow you to serve nitro coffee in a matter of minutes and maintain rich and frothy pours to get that sort of foamy mouthfeel that you are expecting from a nitro cold brew.

You will attach your nitrogen gas line to the “gas in a post” on top of the lid. By using this lid, you can start serving nitro coffee in minutes without shaking the keg constantly. You are consistently infusing your cold brew from the bottom up with every pour of nitro.

Though this method is expensive but saves your time, effort, and steps for procuring nitro coffee, the Inline Nitro Infuser works inside your draft system and turns your cold brew coffee into nitro coffee as you pour. Without pre-infusing, you hook up your flat keg of cold brew and achieve a rich froth nitro pour. This method saves your nitro gas as well as your time.

After gaining the knowledge of all methods, now you better decide which method could better perform for your nitro operation.

Now, plug in your nitrogen gas post into its usual place in the corny keg.

The nitrogen will go entirely through the tube into the keg and then come out through the carbonating stone, which is immersed in the bottom of the keg, and this will spread the maximum amount of nitrogen throughout the keg. Thus nitrogen will be infused into the cold brew coffee.

Now set the regulator connected to your nitrogen canister to about five PSI in the nitrogen regulator.

At first, you take the oxygen out of the keg.

So connect your gas post to the keg and pull the relief valve only once or twice, and this way, you can get oxygen out of the keg through the gas post.

You will now send nitrogen through the diffuser.

You can dial pressure in the regulator.

Set up just five PSIs in a couple of minutes so you can reach your goal, which is about thirty-five to forty-five PSIs.

And when you reach the level of 36 PSI, leave it there to be tested.

Now your nitro coffee is ready. You can serve it as a beer in a glass or cup through a stout faucet. 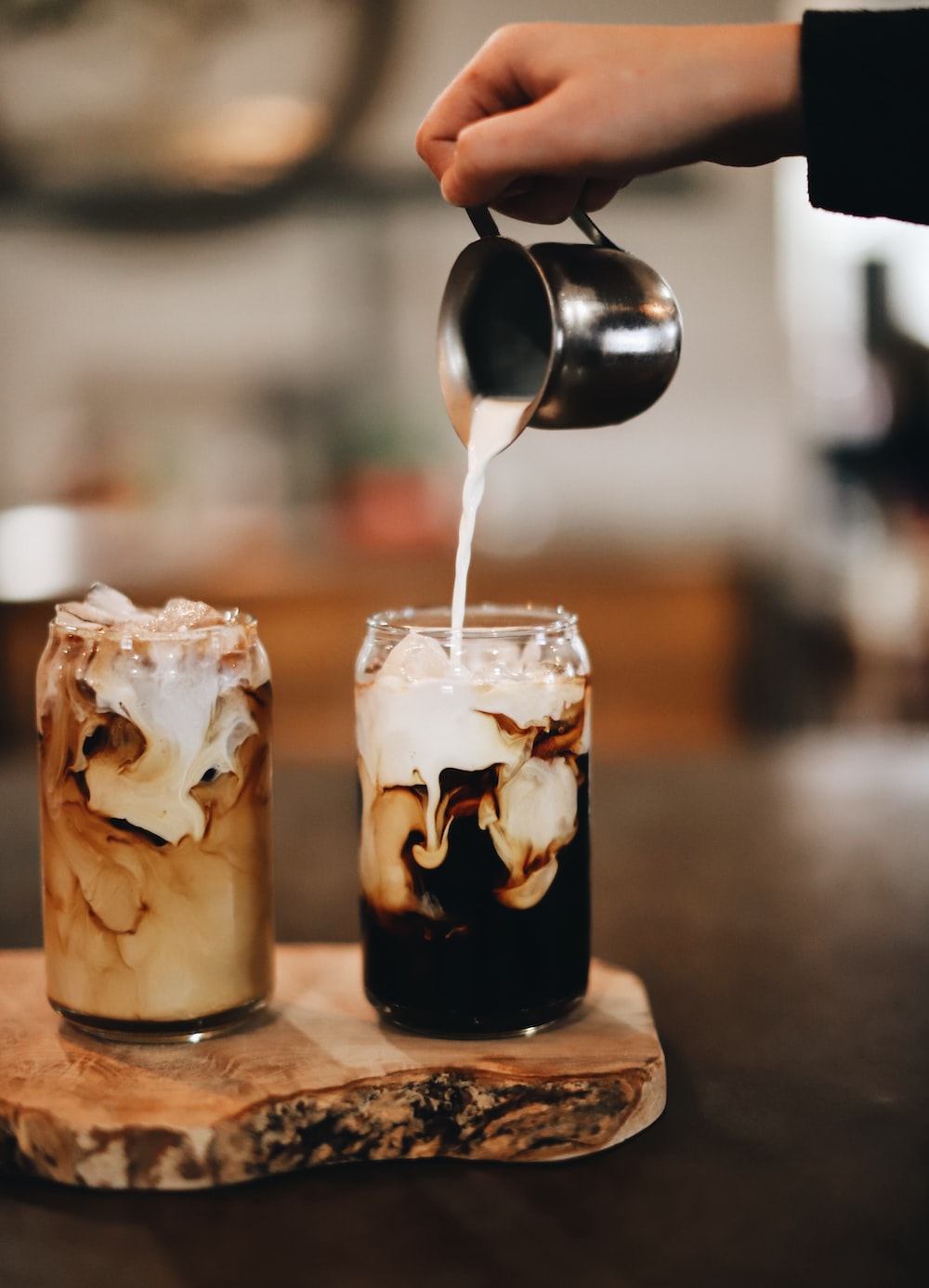 Unlike regular coffees, nitro cold brew coffee is an unusual coffee. Just as the taste, texture, mouthfeel, and flavor of nitro are different from all coffees, so is the method it is made.

Further, the technical complications in making this are such that if they are slightly altered, there may be a chance of an accident where your requirements will not be met in the taste and texture of the coffee. So please be careful while working on a nitro project.

Where Can I find Nitro Gas for Nitro Coffee?

Find out where they get gas from local bars and restaurants serving nitro coffee. A little polite inquiry with a manager will help you find a good supplier of nitro gas.

What is the Difference Between a Nitrogen And a CO2 Cylinder?

There are two main differences between nitrogen and a CO2 cylinder.

The first difference is that nitrogen requires a more powerful cylinder than CO2 because nitrogen is stored at a much higher pressure.

The Second difference is unlike the CO2 cylinder’s male connection, and a nitrogen cylinder also has a female threaded connection.

Can I use the old regulator/Cylinder instead of buying a new one?

A failed cylinder, valve, or regulator can cause a severe problem that can injure passersby and certainly cause extensive damage. So, Please buy a new regulator that meets the safety requirements. Assumptions don’t require here. To save some money is not worth the risk of severe injury and damage to any property. Spread the loveHow to Make a Latte with a Manual Breville Espresso Machine Use 1/2 cup cold whole milk.  Add 1tsp of sugar in the raw to the cold milk. Steam the milk first because if you do the espresso first, the steam wand spits out hot water before it becomes steam Put a thermometer… Spread the loveThe Coffee Aim measures audience engagement and site statistics to understand how we can improve our services and enhance the quality of those services. “It’s when you look over the top of your coffee cup that you can smile at life.” Nespresso pods deliver the perfect coffee cup and make your day refreshing…. Spread the love Coffee lovers do not work well all day unless they drink a cup of caffeinated espresso or coffee in the morning. Coffee drinkers have many options to satisfy their cravings, but they tend to rely more on Nespresso models, as these machines specialize in estimating barista-style coffee making at home. These Nespresso’s… Spread the loveNespresso pods allow you to brew your favorite coffee recipes (Nespresso iced coffee, latte, without stepping into the coffee shop. These pods make your morning/life refreshing and unleash your inner barista. Enjoy hot or cool, brew with oat milk or another kind of milk, and garnish with honey, caramel, vanilla syrup, etc. Nespresso…